Aug 7/18
On August 7th, 2018 the leopard that has been evading capture in the DEKUT Conservancy since 2012 was finally trapped. Using information about leopard behavior in the wild and a well-planned strategy, the conservancy team was finally able to win this six year-long battle.
Throughout the day leopards will remain in the thick of the jungle, however by night leopards will travel and hunt out in the open. The team was responsible for lighting open fires on each main pathway in the conservancy, leaving just one pathway clear of fire that lead to the trap. They were also aware that the leopard had not eaten for two weeks, as no carcasses had been found within the conservancy.This left the leopard desperate for food, as they typically need to eat every 2-3 days.
The trap was designed using a double baiting system.In the main cage was a small prey, significant enough to entice the leopard to enter the trap. Behind that cage lay another small prey to further entice the animal to enter the trap enough to trigger the door to close. The double baiting and fire technique proved to be an effective method in trapping the leopard after various attempts at trapping in previous years. 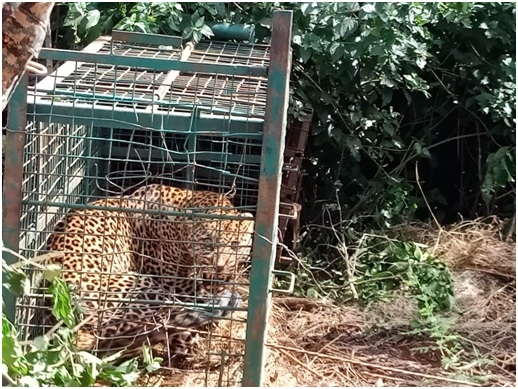 Upon discovering that the leopard was caught the following morning, the conservancy team proceeded to cover the cage with branches as the leopard was showing signs of aggression. The leopard had tried desperately to escape the cage throughout the night, as observed by the bent wires and large holes in the trap.

Kenya Wildlife Service was immediately informed of the capture, and they arrived with a team and truck to assist relocating the leopard. With the help of local staff, they travelled to the regional headquarters and decided that Aberdare National Park would become the leopard’s new home. Leopards are very territorial and solitary mammals, and so it was taken to the far western region of the park to ensure that it will not return to the area. The fence surrounding the conservancy is checked often to ensure that the leopard cannot re-enter the area by burrowing or trees that may have fallen over the fence. 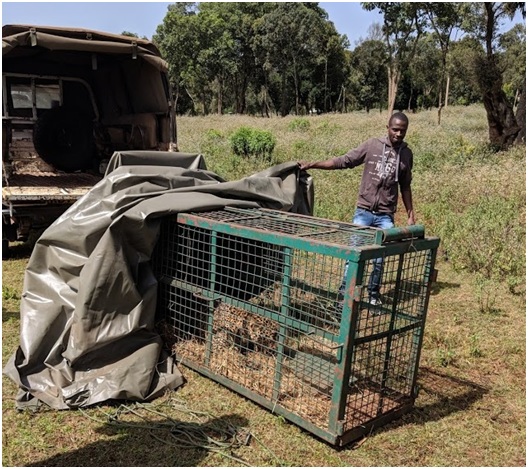 For years the conservancy leopard had been hunting the grazing mammals, preying on the young, old and sick. In a relatively small conservancy, this can have a large impact on the populations of these species. The capture of the leopard is a very important action for the longevity and sustainability of wildlife species in this conservancy. Their populations are now expected to increase, after remaining stagnant for so many years.